Scott Crego and Mike Licastro of Frank P. Langley Co. met with the project manager and engineer for Wendel Energy Services and presented the features, functions, and benefits of Tower Tech cooling towers. The customers recognized the potential energy, maintenance and chemical treatment savings, all of which would be the responsibility of Wendel Energy Services for the duration of the performance contract. At the conclusion of this introductory meeting, a request for proposal was issued to Frank P. Langley Co.

The application is HVAC comfort cooling, seasonal use (May-Oct). The engineer had calculated the peak load at ~500 tons, which would occur during ~5% of the cooling season. It was determined that a single 400-ton chiller would handle the load practically the entire season. 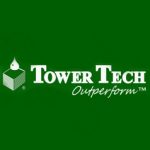 Cooling tower design conditions were set at 1200 GPM and 2400 GPM, tower entering water at 95°F, tower leaving water at 85°F, and entering wet bulb temperature at 75°F. A challenge was for the new tower to fit the same footprint as the old tower, which was closely surrounded by walls on three sides.

A Tower Tech model TTXE-081975, 8-fan cooling tower was selected to satisfy the design conditions and space limitation. Frank P. Langley Co. submitted a quotation for the TTXE-081975 with 7.5HP fan motors, 6’ support legs, fan motors pre-wired to individual rotary disconnects, and a control panel with temperature control option. It is important to note the cooling tower fans would operate in unison; a variable-frequency drive (VFD), to be supplied by others, would operate all the tower fans in unison.

Passing on the value of good engineering 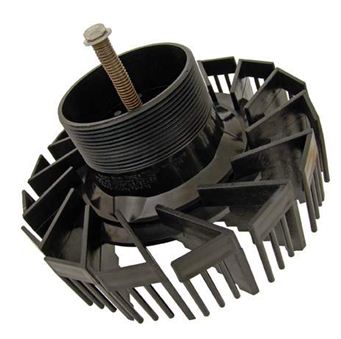 Another important factor in the tower selection process was Tower Tech’s patented Rotary Spray Nozzle with its unique 3:1 turndown capability. This feature would allow the entire 800 tons of fill media surface area to participate under a 400-ton chiller load. With constant condenser water flow and variable temperature difference on the chiller condenser, Tower Tech’s projected operating fan motor horsepower was <8 BHP, or only about 40% of the horsepower required by the proposed 400-ton Baltimore Aircoil tower. Furthermore, on days where the wet bulb temperature may exceed the 75°F design and the building load is still 400 tons or less, the conventional tower would lose the ability to maintain adequate condenser water temperature. As a result, the second 400 ton chiller and cooling tower would have to be staged on in order to allow load sharing between towers
and get the condenser water temperature back in line.

Applying the same scenario with the Tower Tech cooling tower (which is able to use all of the fill media surface area all the time due to the turndown capability of the Rotary Spray Nozzle), fan speeds could be increased gradually until the condenser water set-point is reached, thereby keeping the single chiller satisfied and the second chiller turned off. An interesting note following the new cooling tower’s first year of operation: Buffalo experienced one of the hottest summers on record in 2005. The design dwet bulb temperature of 75°F was exceeded on at least 20 days, yet the second chiller was never needed.

A project planning meeting was held with the engineer, building automation company, and mechanical contractor to implement all the system design enhancements made available by the Tower Tech cooling tower design. Principal goals were to reduce system piping, use a single VFD to drive all eight fans simultaneously, and to communicate with the Building 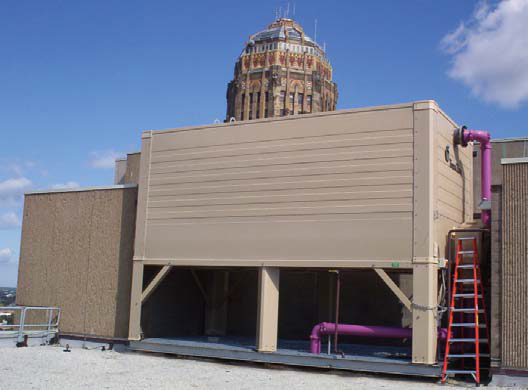 The cooling tower fan motor control panel is also equipped with an analog input that accepts a 4-20 milliamp signal from the BAS allowing remote modification of cold water set-point as required. In the event the temperature signal is lost by the BAS system the PLC automatically defaults to the last temperature set-point value input through the cover mounted interface panel, thus keeping the tower operational while the problem is corrected.

As all tower fan motors are wired to a single VFD, the motor control panel was also equipped to supply a 4-20 milliamp (or 0-24 VDC) signal to the VFD allowing for continuous fan speed adjustment to maintain the desired cold water temperature set-point at the lowest possible energy (kW) consumption. The VFD was supplied with a bypass arrangement allowing for drive maintenance and to provide full line voltage to the tower fan motors in the case of VFD drive failure. The Tower Tech fan motor control panel was equipped
with a dry contact wired to a dry contact in the VFD, creating a “permission loop,” or “drive available” signal. When the VFD bypass is engaged, or in the event of
VFD failure, the dry contact will open and the Tower Tech PLC recognizes that the VFD is no longer available and assumes command of the tower fans. Its first
step is to de-energize all fan motor starters and then begin a fan cycling sequence to maintain cold water temperature set-point. This sequence restarts the tower fans in pairs,
beginning from the end of the tower closest to the external sump. Only the number of fans required to maintain cold water temperature set-point will be turned on. This allows the tower to continue providing energy savings even in the absence of the VFD.

An important maintenance feature: each tower fan motor is factory pre-wired to an individual rotary disconnect. This provides the flexibility to service a single fan motor
while the rest of the tower continues to operate. And because the tower fan motors are accessible from grade level and are small (7.5HP each) and relatively lightweight, service can be performed without scaffolding or crane.

Find out how our engineering expertise can provide value to your next big project.